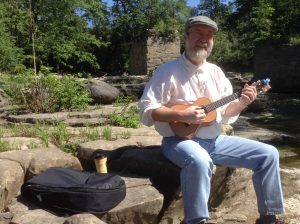 Welcome to the sixteenth instalment of Monday #MusicMatters as part of the JAMS Canada PRO Series – “Here’s What I Know”.

Why are you passionate about Folk Music and who are your songwriting influences?

Folk Music is a form of communion for me. It connects me to the things that matter to me: Kindred Souls, Mother Nature and God. It connects me to the past, the present and a future imagined. It connects me to issues that matter: social and civil rights issues; environmental issues and the human condition. The Folk Music I gravitate to is a lot about storytelling so the words are important to me. Melody provides the vehicle within which the words are delivered. The journey works best when the melody supports and enhances the mood and rhythm of the words. However, when I write a Folk song the words must stand on their own without the melody as if you are reading poetry.

Although I like many types of music like Punk, New Wave, British 60s Rock, British Folk Rock, Celtic and Americana Roots; what I heard on my parents’ records as a youngster were my first influences as a songwriter. As a youngster the records that captivated my imagination contained story songs with catchy melodies: Peter, Paul and Mary; Chad Mitchell Trio; Kingston Trio; Johnny Horton; and Clancy Brothers. When I first started writing songs as a teenager Gordon Lightfoot was a big influence. In recent years as a senior citizen Kate Rusby of Yorkshire, England has become an influence.

What motivated you to write historical ballads about your home region?

Looking through the windshield to my life ahead, I realized that I was closer to the end of my mortal journey on this planet than to the beginning. Turning sixty, it seems, was a good time to look deep into the rear-view mirror for the roads that got me here thus far. This journey would take me back beyond the trailing horizon of my own life and down the winding pathways of our ancestors. Folk music, with its evocative lyrics about people, places and time, was the most natural way for me to tell some of the fascinating stories of our past. The Kingston – Greater Napanee – Quinte region, where I was born and live, is a fascinating place with a rich history of early indigenous peoples: Huron-Wendat, Haudenosaunee and Anishinaabe; 17th century French explorers, missionaries and soldiers; Loyalists and Mohawk refugees from the American Revolution (1775-1783); and 19th century American, British, Irish and European immigrant settlers. The area’s geography is also fascinating, blessed with intricate bays and islands, lakes and rivers; and bounded to the north by the wilderness of the Canadian Shield and to the south by Lake Ontario and New York State. In 2019 I released a book and album of historical ballads about the region called IF LILACS COULD SING. For more information on this please check out my YouTube channel by the same name and my Facebook page: @StephenBruceMeddMusic.

What is your songwriting connection to Avril Lavigne?

Avril performed in 1998 and 1999 at the Quinte Spirit Festival which was created to inspire musical and artistic creativity in the Kingston – Greater Napanee – Quinte region and to celebrate the region’s natural beauty.  As an extension of our festival two CD projects were undertaken to help promote local musicians.

I wrote a country-gospel song for Avril called “Touch the Sky” on my first CD, “The Quinte Spirit” which would become Avril’s first studio recording. This opportunity helped inspire her. She said to me and her Dad afterwards that it was one of the most memorable moments of her life (up to that point!). It was important to me that my friends John Lavigne and Cliff Trott join their daughters on the making of this CD.

In December 1999 “The Quinte Spirit” CD was released at a CD release party at Chapters bookstore in Kingston, Ontario. While a few of us sang a few songs to promote the CD which was being sold there, there was a man videotaping Avril who would eventually become her first manager. This gig was a transition point for Avril singing as a young amateur to becoming an international pop superstar.

My second CD, “My Window to You” was released in the fall of 2000. Avril recorded two songs on this CD that I wrote for her: “Temple of Life” and “Two Rivers”. I was happy to find out that my CDs were used in the beginning as Avril’s demo CDs in the U.S. The core team that supported me on both CDs were Cliff Trott, David Archibald and Duncan Holt. In the liner notes of Avril’s internationally successful debut CD, ” Let Go”, she thanked us all for believing in her.

Are you working on any projects at the moment?

A compilation album, LATE ARRIVAL, that contains 10 remastered songs from the 2 albums that featured Avril Lavigne as outlined above. There are more than 30 local musicians from the Kingston-Napanee area who had participated in 18 recordings across the 2 albums of songs that I composed. 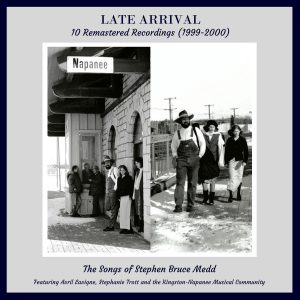 How has the COVID crisis affected you as a musician?

Before the COVID crisis I was performing regularly in small venues around the region. There is a very supportive music community in the area who I miss getting together with over beers, laughs and of course lots of live music! So, I really miss the camaraderie and socialization. However, I have used this period of isolation to read more history, write more ballads and record my first music video. I do worry though about my musical friends who need their live performances and albums sales to put food on the table. They are suffering a financial pandemic like the venue owners who normally hire them. Streaming of live musical performances on social media platforms is an unfortunate distant second to the real in-the-flesh experience. Perhaps one positive thing from this new norm is that there is an equalization that has occurred between the international music celebrity and the common music road-warrior. They are both performing live from their living room couch!

Stephen Bruce Medd is a performing songwriter of historical ballads and spiritual songs. His songs are inspired by the remote and beautiful Canadian landscapes that he traveled as an exploration geologist; social and environmental issues of the day; and the fascinating history of the Napanee, Kingston and Bay of Quinte region in which he lives.

Stephen assisted Avril Lavigne in her early development by writing 3 Folk-Gospel songs for her that became Avril’s first-ever studio recordings. Recently, he has published a book, entitled: If Lilacs Could Sing, a compilation of original and adapted ballads and rare archival pictures of historical events that occurred in Greater Napanee and the Bay of Quinte area.

For information about downloading or streaming the music of “If Lilacs Could Sing” or other songs by Stephen Bruce Medd as they become available please visit: https://www.facebook.com/StephenBruceMeddMusic

Find out more about Stephen on his website:  https://stephenbrucemeddmusic.bandcamp.com/